Who’s back?  The great blue herons, of course. 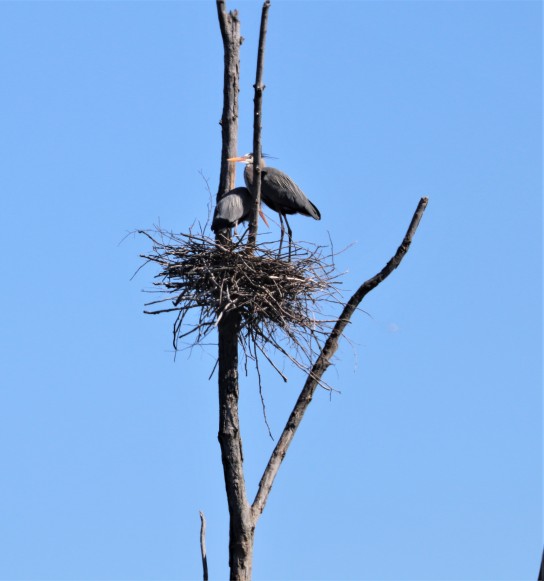 There are just a few right now.  Maybe they are the hardy ones who stayed here over the winter, fishing in any open water they could find, or maybe they are the first to arrive after weeks of travel on the Atlantic Flyway.  Who knows, but in any event in a week or so as the weather warms, we will see more and more of them returning here to mate and nest.

And I couldn’t be happier! These birds with their gangly legs and googly eyes are efficient waders and graceful fliers, so beautiful to behold as they fly over the marsh or stand stoically in the water awaiting the perfect moment to pounce upon an unlucky fish or a frog.

Herons aren’t exactly community birds — if you have ever seen two of them strut and posture in a turf war, you’ll know what I mean — but they are, strangely enough, community nesters. 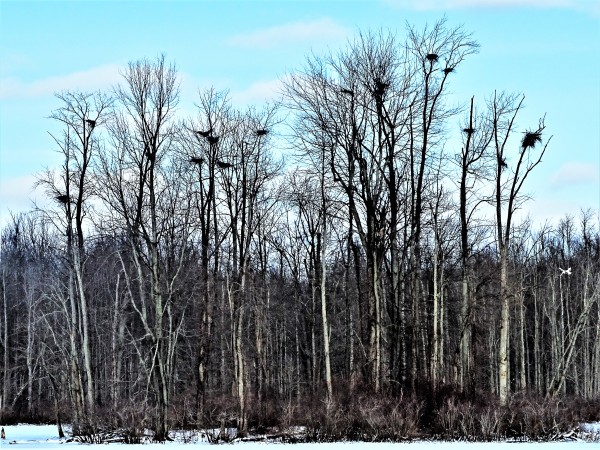 In fact, heron rookeries are found here in western New York just about wherever there is a marshy stand of trees, alive or dead, big enough to host 10, 12, or 30 nests.  This rookery off Rt 89 in the town of Butler, NY had 18 nests last summer.   Only 10 survived the winter.  Hopefully, the returning herons will occupy these and even build more.

Mama Eagle should be finished incubating before returning herons will need this nest.

I think some of the returning birds will be a bit surprised to find that someone else has already grabbed prime rookery real estate.

Herons returning to the rookery off Rt 89 discovered an eagle mama inhabiting one of their homes.  She has been nesting there for about two weeks now.

Apparently the eagles in Butler feel no need to build nests of their own when there are so many nice, big heron nests available for free 😉  And osprey nests!  Last year an eagle family nested in a nest ospreys had constructed in this utility tower.  They left days before an osprey family returned to claim it as their own. 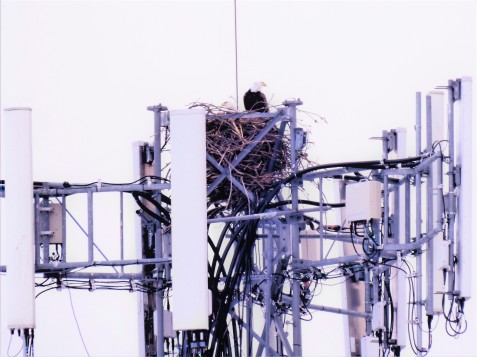 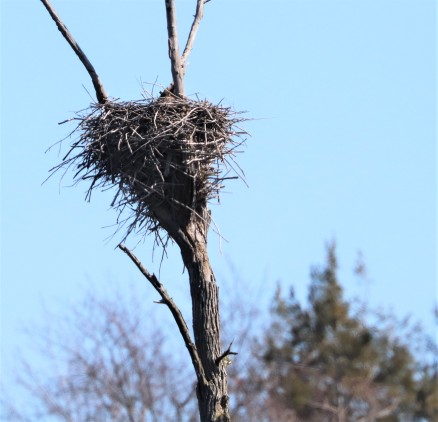 At the Sterling Nature Center there is a long-eared owl sitting on an egg clutch right smack in the middle of the heron rookery there.  This isn’t very surprising since owls are shameless when it comes to building nests, because they don’t.  Why bother doing all that work when there are so many tree cavities, hollows, and — better yet — sturdy, spacious nests built by hawks, ospreys, and yes, herons, too, available for the taking!

So far, the herons have paid little to no attention to these squatters. If they noticed them, they seem to have simply shrugged their shoulders and gone about finding another nest in the rookery to call their own.

Today I drove by the Butler swamp today to see how Mama Eagle was doingand then drove to Sterling Nature Center to hike up the Heron Trail.  With two cameras and some trail mix, I settled in to watch The Heron Show, already in progress. 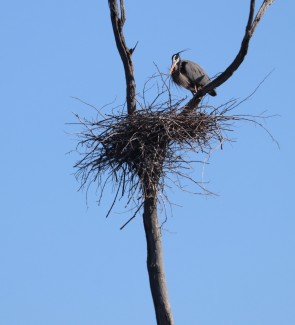 Here I saw one young heron claim an unused nest.  He was soon busy at work, bolstering its walls with fresh twigs.

After some twitching of his head and nuzzling with his bill, the twig was soon lodged satisfactorily in place, and Heron #1 flew off in search of more nest-building materials.  However, another young heron soon took his place.

Heron #2 proved to be equally industrious, unraveling and then removing the twig that his neighbor had so carefully installed.  Then, off he flew to present this gift to his beloved, who was waiting for him at home.

“Look, my love, especially for you!”

A brief inspection was all that was needed to approve the offering, which was then promptly incorporated into their own home.  Then, Heron #2 bid his beloved good-bye and was off once more. 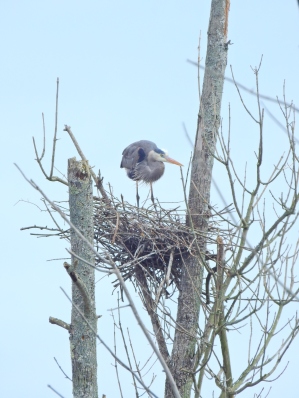 Unfettered by haste or any sense of morality and armed only with his wits, stealth, and a long pointy bill, Heron #2 landed on his neighbor’s nest and once more assiduously removed another twig.  Again, off he flew, undiscovered, to present his lady with this second lovely albeit larcenous gift.

This activity went on, I suspect, long after I was too cold to continue counting and documenting his nefarious exploits.