We have the (ubiquitous) pie-billed type here.  They’ve come back stronger, I think, this year. . .or maybe I just didn’t notice them as much last year as I do now.   They’re cute little things, like tiny ducks with a fancy-looking bill.  But they’re definitely weird.

They like to hide in the vegetation that grows in marshy water, but they don’t eat it much.   That is the stuff of which ducks and geese are made.  The pie-billed grebe prefers food that wiggles, such as fish, frogs, insects, and the like — much tastier than a dried-up cattail or some soggy pickerel weed.  Grebes, including the pie-billed type, also eat their own feathers (!), which they sometimes feed to their young. I have to say ewwww! to that.

They build mats, not nests, from that marshy vegetation, and the chicks hatch on that.  Babies can swim from the day they are born, but they spend most of their first 3 weeks on the mat — either that, or riding around on their parents’ backs.  Lazy little things!

Grebes aren’t so good at walking and are worse at flying, but they are great swimmers.  Those feathers, when they aren’t being consumed, hold a lot of water — fluffy feathers  are a good thing when you’ve got three or four little ones riding on your back and you’re trying to stay afloat. 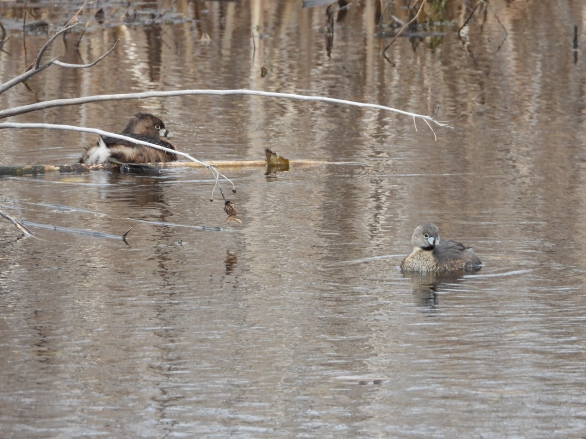 I’ll be watching, as the weather gets warmer, for those little ones to appear! 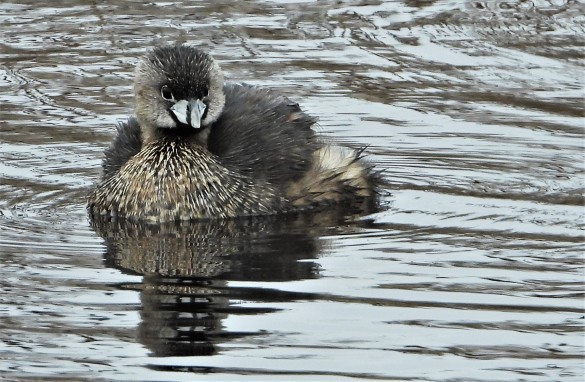