Well, they make a lot of noise, and they poo everywhere.

But pigeons are actually kind of colorful and cute.

Turns out they are rather unique among birds, in that they produce “milk” to feed their young.  The “milk” is not produced in mammary glands, so it is not really milk.  It is produced in the crop, an enlargement of part of the esophagus in birds that stores food.  In pigeons, the crop lining produces a thick, nutritious liquid that is fed to the squabs.

Interestingly, the crop milk is produced by both male AND female pigeons — so those 2:00 a.m. feedings are not solely a mother’s duty. . .not if you are a pigeon.  Or a flamingo.

And if you are an emperor penguin mother, you don’t have to nurse the babies at all.  You can go off to the sea ice and feed because it’s dad who produces the crop milk and tends the newborn. 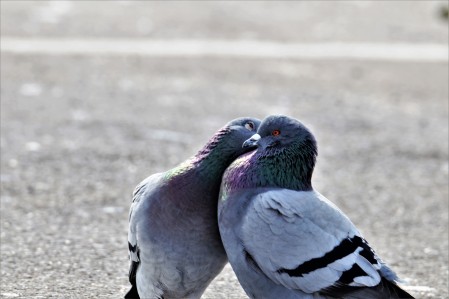 Psst — do you want to know a secret?