I really love my Olympus gear, but I can’t ignore the full-frame fuss any longer.   So, I took the plunge and bought a (used) Sony — not the latest model and certainly not the most expensive — but one that Digital Camera World recommended as a very capable and affordable full-frame, as long as you don’t do video (https://www.digitalcameraworld.com/buying-guides/best-full-frame-mirrorless-camera).

Although still a relative newbie to the world of photography, I’ve had enough experience with The Big Three (Sony, Canon, and Nikon) to know that I won’t mess around with either Canon or Nikon anymore, because Sony has many of the features that I love in my Olympus gear, especially the color technology.

The Big Three all sell mirrorless systems, but I was pleased to see that Sony was well represented in the list of full-frames on the Digital Camera World website.

It’s so weird.  Olympus has state-of-the-art technology packed into their camera bodies, yet they struggled financially for a couple of years before being sold to JIP (Japan Industrial Partners).  But this very technology — lightweight bodies, 5-axis IBIS, lag-less electronic viewfinders, live composite, etc. – could not keep Olympus Imaging afloat. . .ironically, this technology is precisely what the Big Three are scrambling to include in marketing their new mirrorless lines, even though such things have been around in Olympus bodies and lenses for years.

Sheesh, Sony’s a7ii is the first of its cameras to feature 5-axis  “Steady Shot,” but their gear is so heavy that it’s pretty meaningless.  You still need to use a tripod — or at least balance the camera and lens on a pillow placed strategically on a rolled-down window or the top of your car or on a nearby tree limb.

The “steady shot” technology isn’t new to Olympus.  Even their entry-level bodies (such as the EM10) have IBIS.

And their gear is light enough so that 5-axis IBIS is usable without a tripod.  With it you gain about 3-5 stops of handholding.  Tripods aren’t necessary unless you are pushing the limits of the system.

Even handheld “silky water” shots are possible! Let’s see you handhold “silky water” with a (much heavier) Sony system or worse, with a Canon body wearing a long L lens!  Or with that silly overpriced Nikon p1000 with a lens that you can’t fully extend without it jiggling and ruining your photos. 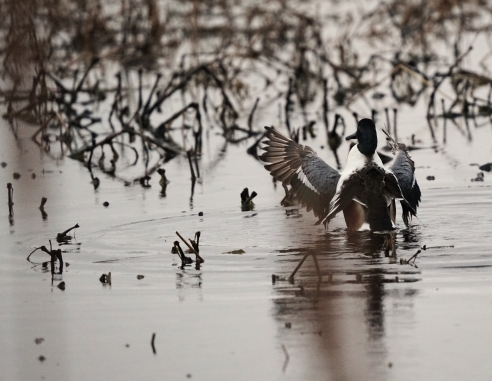 Oh, well, I guess that’s what tripods are for! (see above) 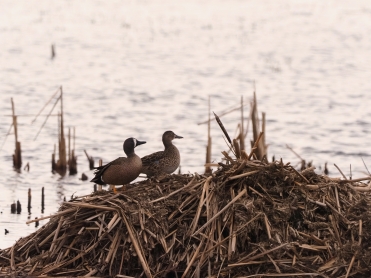 (I’m not even going to consider the sensors employed in bridge cameras, which, except for the Sony RX10, measure less than an inch!)

Anyway, these smaller sensors are assigned a “crop factor” by a mathematical formula that calculates how much of an image is lost when compared to the same image produced by the standard full-frame sensor.  Nikon’s DX sensors and Sony’s have a crop factor of 1.5, Canon’s APS-C sensors 1.6, and M4/3 (Olympus, Panasonic) figure in at 2.0. 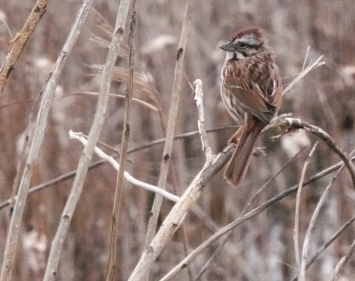 This grainy photo of a song sparrow, though, is the reason I am not concerned with bridge cameras.  Their sensors are so small that their crop factor averages around 5.6!  In fact, the only ones with sensors smaller than that are in cell phone cameras — they are reallyreallyREALLY tiny with a crop factor that hovers around 8.  Both the bridge cameras and the cell phone cameras are great in good light but on a gloomy, dull day not so much.

Crop factors are both good and bad. 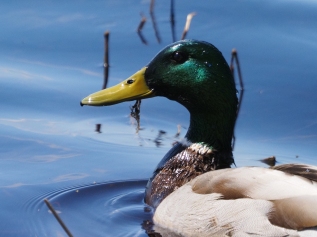 Yes, I do shoot ducks — but only with a camera.  That’s how real men and women shoot animals.

So, if you are a nature photographer and want to get more focal length for your dollars, M4/3 is for you. 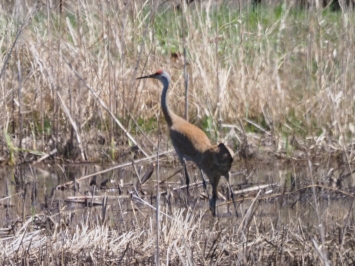 Bad:  Smaller sensors have smaller pixels — and if they don’t, they have less of them.  Since pixels are what admits light, smaller sensors can’t admit as much light as the larger pixels on a full-frame sensor.  Even if they have the same number of pixels, they have to be smaller to fit into the smaller cropped sensors.  That means that in low-light situations, users of smaller-sensor cameras have to fool around with the exposure triangle to make the most of the available light.  That means either increasing the ISO, opening up the aperture, slowing down the shutter speed, or using some combination thereof to make the most of the available light.  Each of these options poses its own problems. Even though I made several attempts to compensate for the distance and low light in the sandhill crane photo, it turned out blurry and just awful.  (Even phase detect AF needs some sort of contrast to work properly!)

When I reviewed the dozens of bad sandhill crane photos I took that day, I could hear a Sony full-frame calling my name.

Even worse:  The larger, full-frame sensor with its larger pixels also has a wider dynamic range that can detect and produce more color.  Which makes it even better at low-light photography than most crop sensors (except for the ones in Olympus cameras) 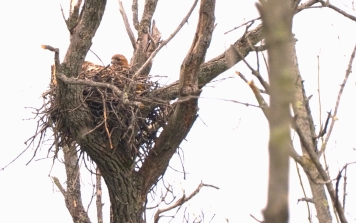 Because, even after switching the 100-400 for the 300mm f/2.8 PRO I still had to bump up the exposure in the EM1x by several stops if I wanted to get any detail at all, the trade-off being a completely blown-out sky and some very pale trees. And whatever detail I managed to capture was lost if I cropped the photo even a little bit.

So, I bought the Sony a7ii and went back to visit Mamma Red-Tail.  And I found a definite improvement.

Compare the results (above) with my later attempt on an equally dull day (we have a lot of those here in western NY) with the a7ii (below).

Even at a distance, there was enough clarity to see Mamma Red-Tail sitting patiently on her eggs, her dark head rising just above the edge of the nest.

The overall effect is sharper, and the sky isn’t blown out.

I was even able to crop the image, which I had to do because of the disparity between the full-frame 600mm lens and the 2.0 crop on the Olympus lens (see discussion about crop sensors, above).

I suppose I could get better results if I trudged into the woods and got a little closer. . .but that would be wrong.  Mamma Red-Tail deserves to feel safe in her home, and I am pleased that she is willing to tolerate my visits-from-afar.  The edge of the road is a respectful distance that allows her enough privacy to continue incubating those precious eggs while allowing me a glimpse of nature at work.