Feeding the Waterfowl, An Update

Well, this blog has definitely been seen, because Ms. van Beusichem has now issued a brochure, Draining the Main Pool, Feeding the Waterfowl, which is available without charge at the MNWR Visitor’s Center.

Nice try, but in my opinion it warrants no cigar.  She merely repeats the glib arguments that we have already heard, albeit with a bit more cheerfulness.

“The Montezuma National Wildlife Refuge,” she states, “was set aside for the protection of migratory birds, especially waterfowl — ducks and geese.” She does not explain why the ducks and geese enjoy favoritism over the other resident (and formerly resident) Refuge wildlife, but she does explain the lengths to which MNWR personnel will go to provide for the special needs of ducks:

Just like you and me, there are certain foods [the ducks] love that are most healthy for them. . .we make every effort to grow the plants that provide the very best food for ducks. These plants need moist soil to germinate and grow and will not come up through the water. Thus, we need to allow our marshes to dry out every so often.

Inside the folded single sheet, there are four views of the main pool, all of which feature water and none of which bear a likeness to the dry green acreage that used to be the main pool. Yet it is here, Ms. van Beusichem states, where “sparrows, sandhill crane[s] and others breed” (did she mean “feed?”  because they don’t breed in the open meadowlands).  She then assures readers that the marsh managers “provide habitat for other wildlife as well, like muskrats, terns, great blue herons and many other species that need water through the summer.” There are no photos to substantiate this claim, other than tiny, grainy, undated insets of the aforementioned animals that were clearly taken in better, wetter days. 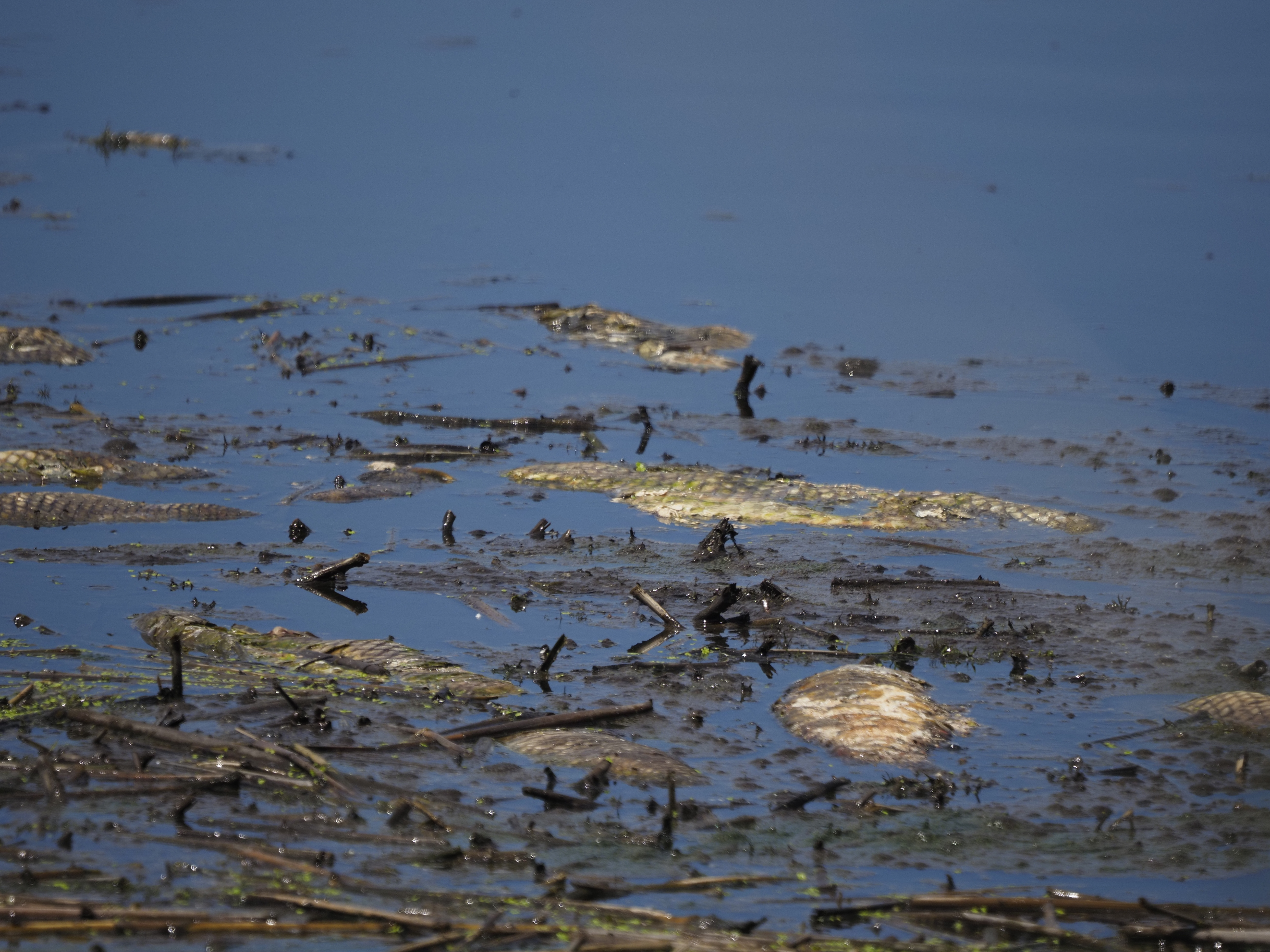 As the water slowly drained away, the carnage became obvious, both to the eye and the nose; however, none of this is shown or even mentioned in the brochure.

The brochure, an 8-1/2 x 11″ sheet folded lengthwise, looks like it was prepared on a home printer. It is so grainy I could not get a decent photo of it to reproduce here. In any event, it does nothing to inspire confidence in either Ms. van Beusichem or the marsh management she tries to defend. The language is annoyingly simplistic, and the featured views bear no resemblance to the water-barren meadows that cover what was once the main pool bottom. The muskrats, herons, and “many other species” she claims are provided for no longer reside at the Refuge because there is no water to support their feeding habits and/or lifestyle. No mention is made of the destruction of the fish ecosystem or the death, carnage, odors, and mass exodus of the fish-eaters that resulted from the creation of a duck-only habitat — it’s as if none of that ever happened.

However, in Ms. van Beusichem’s world, it all ends happily ever after for her readers and the ducks, because “Come fall, water will be added to the Main Pool once again so the ducks can get to their feast!”

But it’s not shooting innocent animals, it’s “harvesting” them. And the US FWS, which oversees national wildlife refuges (including the one at Montezuma) agrees.  https://usfws.medium.com/fall-harvest-traditions-meals-and-foraging-on-refuges-f7fe1fafa1c2

After which they will be shot and killed by members of Ducks Unlimited.