Writing on Joseph Karpinksi’s Facebook Page, Birds of Montezuma National Wildlife Refuge, MNWR spokesperson Andrea van Beusichem advised visitors that Wildlife Drive will be “challenging” this year. I’m not sure if that is the best way to describe it. . .pathetic is more like it. There just isn’t much to see on the grasslands situated where the marshes used to be.

But hey, at least it doesn’t stink like it did back in May! The decomposed fish carcasses that littered the mud flats have fertilized and fed the lush vegetation that now covers the various dried-up pools, including the large one near the Visitors Center and (for the third year in a row) the main pool. 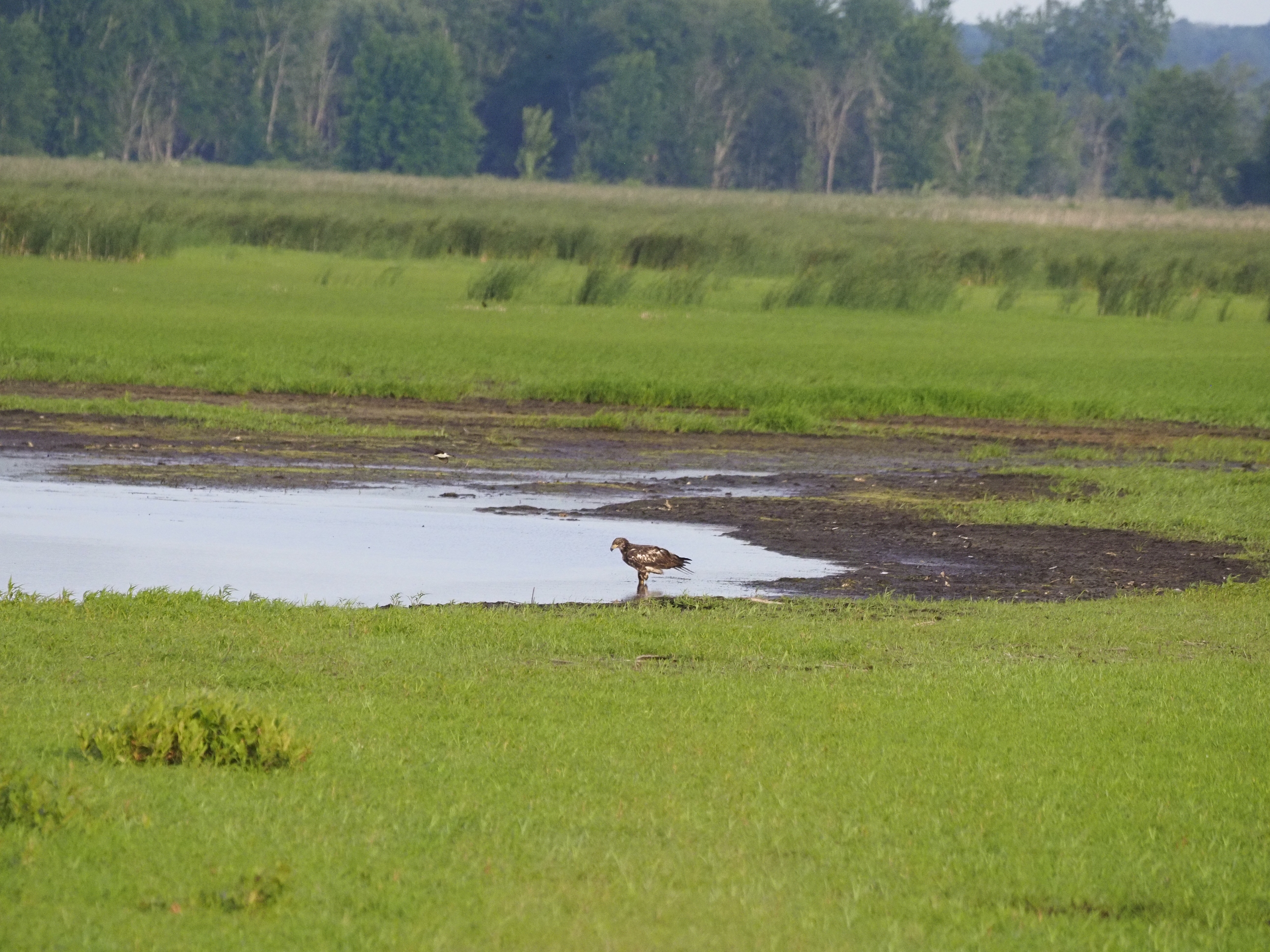 Juvenile eagle — too young to realize he won’t find fish in the “main pool,” which is now only a shallow transitory puddle.

The fish-eating wildlife have mostly vanished to parts unknown, but a few great blue herons, an eagle or two, and some gulls still remain. They obviously didn’t get the memo. The muskrats, beaver, otters, and snakes who lived both in and out of the water are mostly gone, too. Only the ubiquitous species remain — Canada geese, red-wing blackbirds, mallards, some painted turtles, and house sparrows are easily seen along with a few song sparrows, a rare killdeer, and an even rarer yellowlegs. The celebrated sandhill cranes remain, too, but they roam so far out on what used to be the main pool they are visible only as little-dots-with-necks, even with an 800 mm equivalent lens.

No water at MNWR? No problem! This beautiful trumpeter found better (wetter) accommodations on the east-side marsh on Rt 89 in South Butler.

However, land animals are starting to make their appearance, especially in the early mornings. Last year when the main pool was just as dry I spotted a coyote emerging from the dried-up ditch that runs along the west side of the Drive. One morning last week I was following a gentleman from Pennsylvania who was staring so intently at the dots-with-necks way across the main-pool meadow that he missed entirely a young doe who was standing right in front of us, checking out our cars.

Actually, I feel bad when I see so many out-of-state cars. I’ve seen people from Pennsylvania, Massachusetts, Connecticut, and New Jersey who obviously didn’t get the memo, either. It’s too bad, especially with the price of gas these days, for visitors to travel 7 or 10 hours (one way) only to find that Wildlife Drive has become Wildlife Dried.

A curious young lady, taken through the windshield so as not to scare her away.

Still, I never consider it a waste of time (or gasoline) seeking wildlife to photograph. I am one of the fortunate ones who drive down Route 89 South, where you can find wildlife anywhere from Wolcott to Butler to Savannah to Tyre, none of which depend on MNWR water levels for their sustenance — and are doing quite well because of it.

Some views from the Rt 89 Nature Corridor: 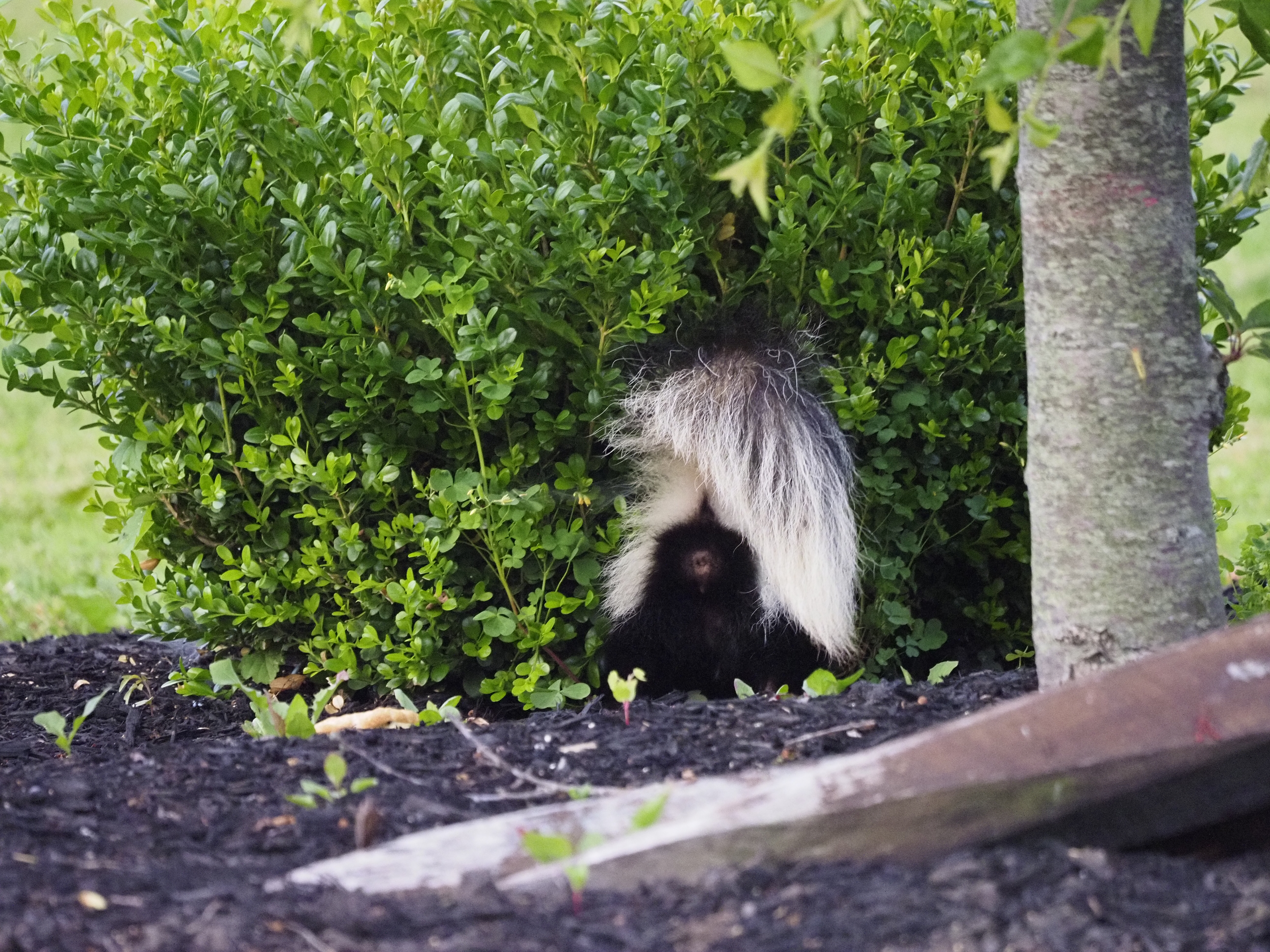 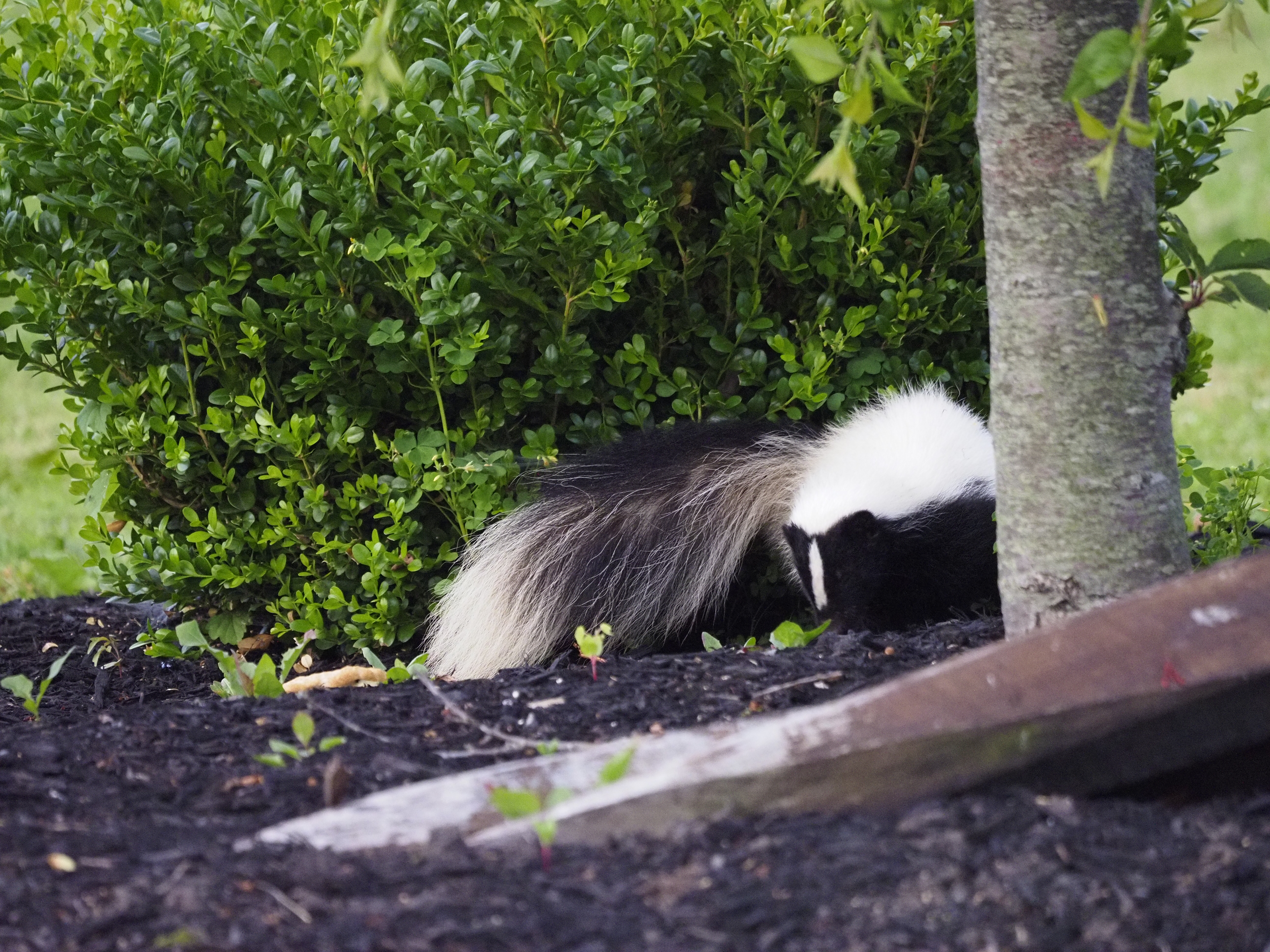 Thank goodness, it was only a warning!

Guarding the nestlings from a nearby flock of pigeons. Rt 89, Tyre 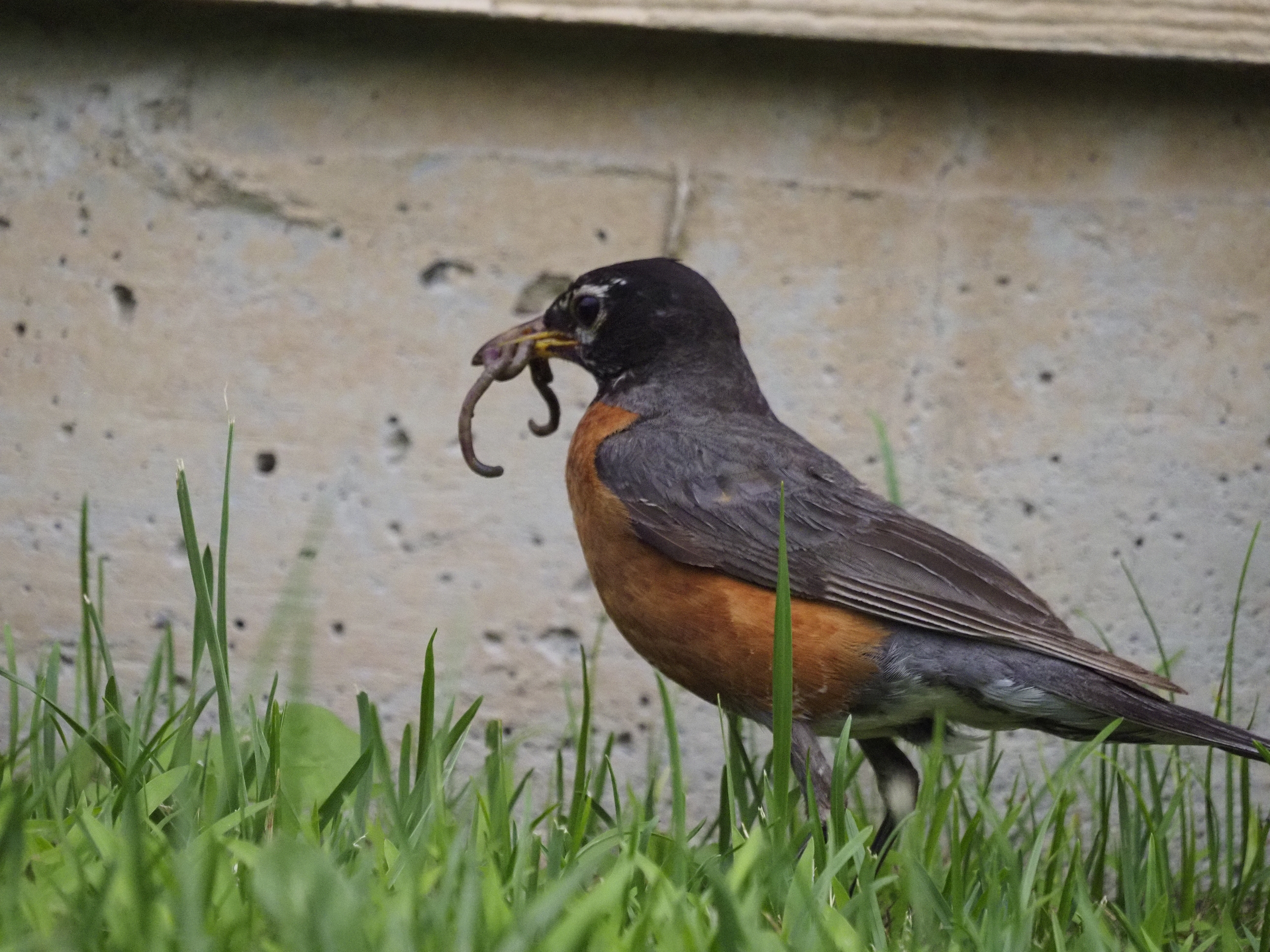 Now some views from the Dried-Up Wildlife Drive:

Just in case they forgot, the refuge is for *wildlife*, not just ducks!

An itchy great blue. . . either that, or he’s looking for his keys.

Harassed by a blackbird. . . no wonder four-and-twenty of them were baked in a pie! 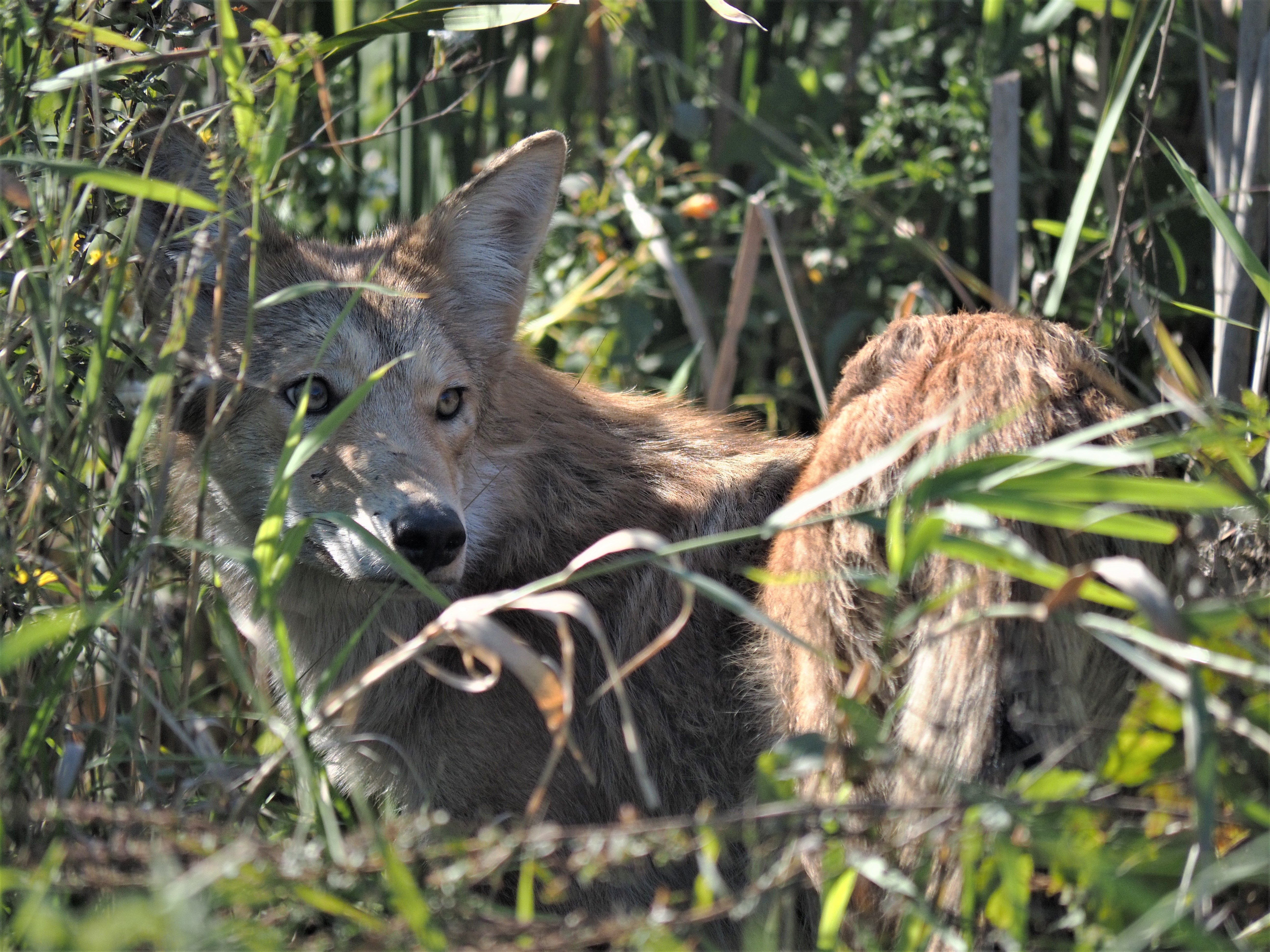 An American avocet enjoying what would prove to be the last significant water level at MNWR (2018). The pools have been drained every year since.

← Spot On!
Feeding the Waterfowl, An Update →