Well, maybe not seven.  There were only two.  But they put on quite a show for anyone passing by the Sodus Bay inlet. 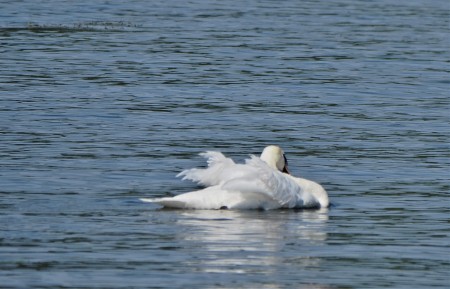 I’ve written elsewhere about how mute swans are not native to the U.S.  Even though they’ve been here for more than 150 years, they still nurse a grudge — not sure exactly why, but they do.

They can be really nasty about it, too, and not just to the native trumpeters, whom they hate.  They can be nasty to each other. 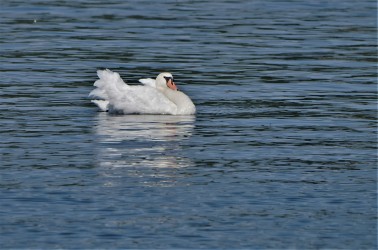 Which explains The Mute Swan Show I witnessed yesterday and why it required a cast of only two.

The plot was suspenseful as one swaggering swan tried to frighten the other away with an impressive display of feathers and might.

It’s a story as old as nature itself but with a ring of currency — both swans participated in the ritual display but maintained a social distance that at times even exceeded the six-foot recommendation and thus precluded this photographer from getting both in the same frame.

Ultimately, though, a truce was called.

After much negotiation, they  agreed to peacefully coexist.

It may be a small world after all, but the bay is big enough for both of them.