The Most Disdained Birds in America

They really didn’t do anything to deserve it.  Nonetheless, they are the birds we love to hate — crows, starlings, and mute swans.

Actually, they are kind of pretty.  Crows are dark and sleek.  Starlings have such cute little polka-dotted tummies (much like a miniature Kate Spade bag).  They both make a terribly unpleasant noise, but crows are quite useful to the human population as a bioindicator of the West Nile virus (thanks, Wiki!).  They eat insects that would otherwise torment us humans.  They’ve always been here and therefore belong here.  We should really be more tolerant — and appreciative.

No such luck for the starlings, who were imported from Europe in the 1890s. . .and not for any particular reason, either.  They were imported for ornament, just because.  Now they are nothing but a nuisance, and bird fanciers have been given permission to disdain them by none other than the prestigious National Audubon Society (https://www.audubon.org/news/birdist-rule-72-its-okay-hate-starlings).  I mean, they do nasty things like chase native birds from their nesting places and stare them down — or even attack them — while feeding, but they haven’t caused any species to go extinct.  They are really just little bullies who annoy their avian comrades. . .even so you often find them feeding alongside many other birds without incident.  True, flocks of starlings do pose a risk for airline pilots, but so do native geese and gulls, and no one talks about mass-murdering THEM.  Rather than annihilate an entire bird species, we might instead investigate ways to coexist and decrease the risk.  (https://www.skybrary.aero/index.php/Bird_Strike). 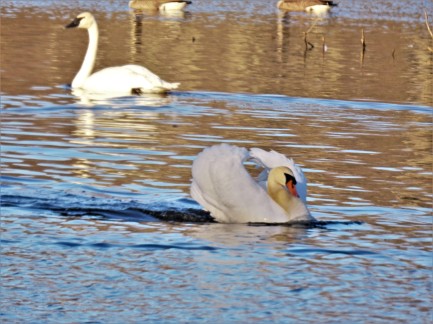 Uh-oh, little trumpeter!  You are being stalked by a mute swan!

Starlings aren’t the only imported species to grow like weeds and displace native wildlife.  Mute swans were imported to the US in the mid-1800s, mainly because lots of rich people thought they looked pretty floating over their private ponds on their great estates.  And they are pretty!  But like starlings, they are aggressive birds who chase the native species away.  Surprisingly, perhaps, mute swans are far from mute.  They can and do emit a harsh hissing sound just before they start to beat you with the sharp, bony aspects of their wings.  If you are a photographer getting too close to their nests, they will simply chase you away, but if you are a duck they could catch you by the neck and fling you across the water. 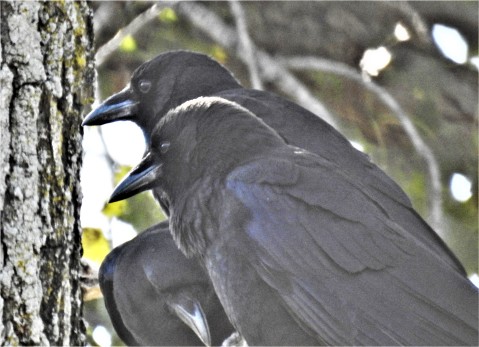 The Three Ami-Crows (“Well you slime-eating dogs, you scum-sucking pigs, you sons of a motherless goat!“)

Some states have enacted mute-swan control policies.  Here in western NY, the DEC patrols search for mute swan nests starting in early spring and  oil any eggs they find to prevent them from hatching.  But nature also helps with population control — foxes and raccoons like to sneak an egg or two for lunch.  One mute swan family I watched this year started out with 12 hatchlings in May, but by September only 2 were left, thanks to a bevy of snapping turtles who think nothing of  feasting upon the young ones. 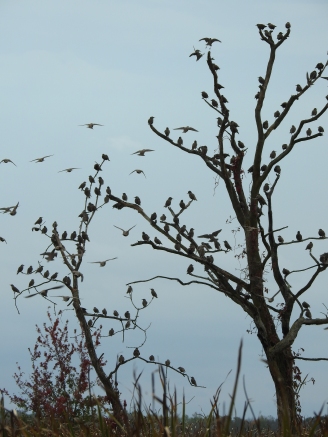 The starling tree at Montezuma.

Life.  It comes in all shapes, colors, and sounds.  And there’s room for all of us here.

← Rocky Racoon? or maybe a long-lost cousin.
A Face Only Its Mother Could Love →

2 Comments on “The Most Disdained Birds in America”